- September 29, 2019
Gévaudan is a region in today's France which was once known for its Occitan and Avernal culture, and also there is the legend of the Beast of Gévaudan (la Bête du Gévaudan) - a predator who allegedly brutally murdered over a hundred humans in the mid-18th century.

Gévaudan is also the name of a Doom Metal band from Hertfordshire that will release their first full length album on October 4th 2019. Let's focus on the latter.

Founded in 2013, Gévaudan have released two EPs and a Single. Now the quartet proudly presents its first longplayer "Iter" which again is a self-release. With its five tracks and a total length of around 44 minutes "Iter" is a great representation of the gloomy, dark, and intensively heavy Doom Metal Gévaudan stand for. Slow and massive Doom Metal rhythms merge with dirty Heavy Metal sounds, here and there add Celtic scales, and somehow contain a kick-ass Punk Rock attitude in the subtext. I am delighted. 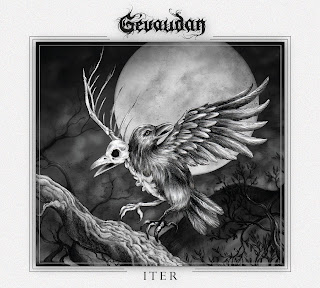 Impressively Gévaudan let harmonic parts dominated by Celtic melodies easily funnel into brachial Doom riffs. Adding to this, "Iter" provides a stunning sound. David's drums adorn the heavy and halting beats with plenty of unexpected but gorgeous fills, while Andy's bass builds an unbreakable heavy foundation of sound on which Bruce's guitar minces, scratches, or just dominates with an untouchable Heavy Metal feeling. And then there is singer Adam who mostly uses a clear, somehow lamenting or accusatory voice for the pitch-black stories of his lyrics. 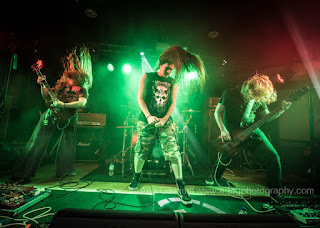 "Iter" is a heavily powerful and yet down-tempo and harmonic album. Gévaudan's first long-player is a beautiful soundtrack for walks through nature, sailing trips, and in any case a bottle of Whiskey. To give some comparables I could state that Gévaudan's music sounds a little like the love child conceived at a Danzig show by members of Primordial and Lord Vicar. But honestly, Gévaudan are way more than this stupid comparison. This is unique melodic and heavy Doom Metal. 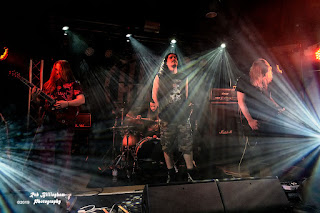