- December 18, 2019
First of all, what a great name!
Here the Captain speaking, the Captain is dead's self-titled EP from 2018 is now available via Krefeld-based Krautrock label Tonzonen Records. Click here to purchase the blue or orange beauty enveloped in a high quality gatefold cover. 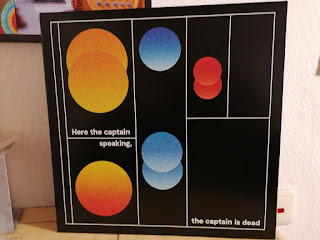 Adrián, Jose and Lucas recorded the six songs in early 2018 in Carcosa Studios, Alboraya. The outcome is three quarters of an hour of peaceful but intense and various Space and Kraut Rock. Here the Captain speaking, the Captain is dead colourfully narrate a chiefless odissey through space and time. The backbone of this story are the driving battery rhythms decorated with plenty of halting and chequered fills. Further guidance is implemented by the warming sounds of the bass which define the travel's direction. Last but not least guitar and synths paint the environment with the brightest colours via manifold loops, effects, and an impression I would call the Space Kraut Atmosphere. 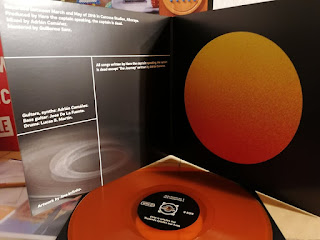 By the time the records starts off with the first song 'Odissey' it appears, the Captain's final message telling about his death has already faded away. From this moment on the spaceship the Spanish band travels on is already on its pilotless journey without return. Thus, the vessel keeps on floating and passes plenty of figures, thoughts and memories. Those include notion of New York's Psychedlic Neo-Folk band 'Cult of Youth', British scientist and inventor 'Michael Faraday', Paul W. S. Anderson's sci-fi horror film 'Event Horizon', and finally 'The Journey' which could either relate to the theme of the first song or to one of many films that go by this name. 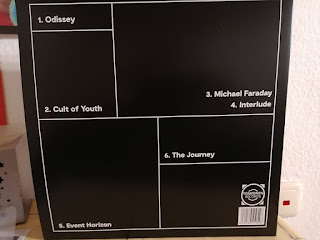 As a little special the final track 'The Journey' is only available on vinyl. A very beautiful bonus for everyone who still prefer their turntables over digital playlists and Spotify.
In general, the Space Kraut odissey the band is taking the listeners to gets a lot of its beauty by the simple but elaborately used element of minimalism. The trio only uses as many layers of musical motifs or loops as necessary to create the most beautiful pictures of galactic scenes.
The minimalistic approach gets emphasized optically by Ana Infinito's plain but gorgeous artwork the record is wrapped up in. In its vintage mode the cover adds the impression of either entering a great planetarium with comfortable seats, or holding the tickets for a monumental sci-fi film in one's hands. Either way, it perfectly fits the album. 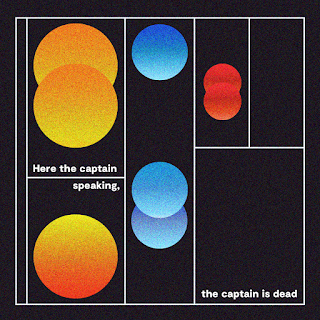 The adjective fitting "Here the Captain speaking, the Captain is dead" the best is relaxant. On a krauty space journey like this, it does not even bother that the captain of the space vessel has passed away. Crew and passengers can joyfully appreciate the gorgeous scenery of vast space garnished with intense memories. This is an amazing journey to close you eyes to. Fantastic Space Kraut!

Death by Horse Introduced by France Gall's biggest hit Death by Horse entered the stage. The Swedish power quartet jumped into action immediately and singer Jahna spent most of the time in front of the stage. Amongst the front rows of people and moshpits she directed the concert perfectly and with sheer power. As far as I can tell, their song 'Dear Jim' was played with an alternative ending which I liked a lot. The looped chorus filled the whole venue, and at latest with their smasher "'Straight Edge' the band totally killed it. Also, during 'Burning the Witches' the probably smoothest change of guitars in the history of Punk Rock wa…
Read more

The Deathvalves were founded in the Greek town of Karditsa in 2006. Since then the quartet has released three albums, "Wild Rock'n'Roll Obsession" (2007), "Deathvalves" (2012), and "Dark Stories from the Past" (2016). For May 1, 2020 Deathvalves have announced their fourth longplayer "Slaves" which will be released on the label New Dream Records.
On their new album Deathvalves present a bit more than half an hour of melodic Hard Rock, Heavy Metal intertwined with Rock'n'Roll attitude. The melodic patterns and motifs have a strong impact on the music of the album which gives it a certain air of Alternative Rock.
Instruments, rhythms and an altogether rather positive harmony join a colourful dance as Deathvalves play their melodic but somewhat heavy songs. Convolving structures are often interrupted by heavily distorted riffing buildung up the momentum.
Wrapping it up, "Slaves" is a solid and nice album. Listening to it f…
Read more

Antillectual's newest release is a 7'' Vinyl containing four cover versions. The idea the Dutch band had was to cover four songs that had a strong impact on early day Punk Rock. Instead of paying hommage to the bands that influenced the Nijmegen-based trio themselves, they preferred going back to the beginnings of Punk Rock Culture. The outcome are four classics reinterpreted in the melodic and somewhat Mod-influenced style of Antillectual.
The cover arwork by Andy Dahlström shows four pictures of Antillectual which are based on the four originals. The beautiful thing about this cover is that you can wrap it around the vinyl record whatever way you want. It will always show two of the artworks.
Release date of the EP is May 12, 2020.
First song is 'Truth hits everybody' by The Police. The song released in 1978 by Sting, AndySummers and Stewart Copeland comes in a dynamic new version that does not deny its original melodic sound. Antillectual perfectly hit the inter…
Read more