5 great new releases - 5 short reviews.
If available on Spotify, one song each will also be added to the MangoRotation playlist (MR) for 14 days.
Further featured playlists of this post will be listed on the bottom. 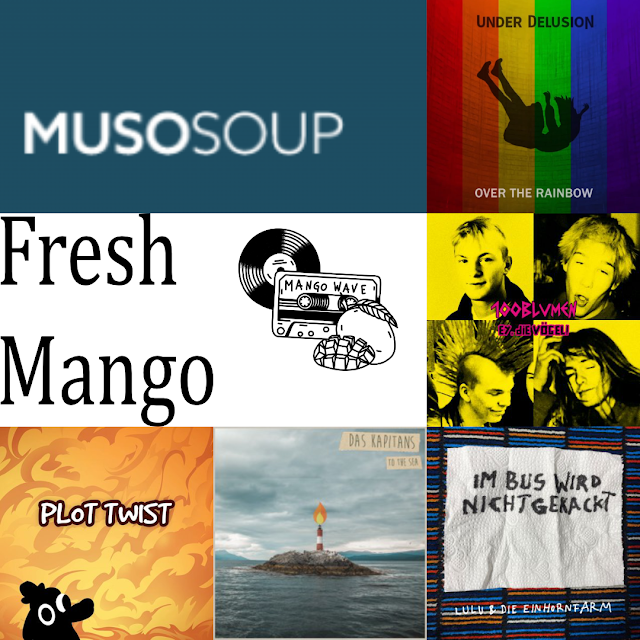 Under Delusion - Over the Rainbow (MR)
(02:34, Single, Digital, selfrelease, 12/08/2022)
Moscow-based band Under Delusion has made themselves a name for their extravagant and enchanting way of bending genres such as Alternative Rock, Nu Metal, Electronica or Industrial Rock, and then alloy them to a whole new thrilling sound. This link will lead you to further Under Delusion content on MangoWave.
Now with their latest single 'Over the Rainbow', the Russian band successfully continues their sonic exploration of the sensual, the rough, and the undiscovered. The new release is a song that was written in loving memory of the band's dear friend Maxx Verkhovski who was involved in the work on Under Delusion's debut album, who spent a lot of time with the members of the band and whom they had a great time with until a day before he went 'Over the Rainbow'.
Under Delusion use the beautiful image of their friend Maxx' soul going over the rainbow and thereby entering another dimension where is no pain, no sorrow, no bad. This impressive and heart-warming thought is carried forward by upbeat and moving Alternative and Synth Rock bands that climax in a psychedelic chorus.
It is the sound that may make you cry and laugh at the same time. Rest in power Maxx Verkhovski, you shall always be remembered!

100blumen - Ey, die Vögel (MR)
(04:04, Single, Digital, Rookie Records, 29/07/2022)
German metropolis Düsseldorf has quite a run concerning great releases in genres such as Post Punk, Punk Rock or Electro Punk. While the new album "Reflektor" by Joseph Boys may be on heavy rotation in many punk rockers' living rooms, here is another gem from the town near Cologne that you should soothe your eardrums with.
Promoting their upcoming album "Hoffnung halt's Maul!" (German: "Shut up hope!"), 100blumen present the full-length' first ex ante single 'Ey, die Vögel' ('Birds, huh!'). Letting raw Punk Rock and dark cold Wave sounds clash, 100blumen make these sonic elements start a whirlwind of a dance that is increasing its intensity with every beat of the song.
Melancholically and in the vein of 1980s Cold War Punk Rock 100blumen tell of the sad songs that are sung by the birds. The song comes with plenty of references, such as the line "Kein Wnter bleibt ewig, das ist doch klar" ("No winter lasts forever, that is for sure") which reminds of the line "Ewig kann nicht Winter sein" ("It cannot be winter forever") from the antifascist anthem 'Die Moorsoldaten'. The line "Von Liebe und Freiheit singen sie lange nicht mehr" ("They haven't sung of love and freedom for a long time") rather reminds of the wall decal "Zahme Vögel singen von Freiheit, wilde Vögel fliegen" ("Tame birds sing of freedom, wild birds fly").
After all, 'Ey, die Vögel' is a dynamic and thrilling timeless Punk Rock banger. If you haven't done it so far, mark September 23rd in your calendars so you do not miss the album to release.

Lulu & Die Einhornfarm - Im Bus wird nicht gekackt (MR)
(01:49, Single, Digital, Bakraufarfita Records, 29/07/2022)
Life can be complicated, especially when onethinks of all the rules there are. Being based in Germany, Lulu & Die Einhornfarm know all too well what it is like getting confronted with rules for this, rules for that, rules for everything, rules for nothing, and rules for rules constantly. Being the good Punk Rockers who they are, the band is here to simplify life once and for all by narrowing it down to the one and only golden rule:
'Im Bus wird nicht gekackt' (German: 'Thou shalt not take a shit on the bus toilet')!
The new single is a monster of a moshpit banger that comes with an anthemic chorus and plenty of thruths about riding buses or coaches. This song should be played at the beginning of every bus and coach ride until people have finally understood the importance of not taking a crap there.
This new single of the band - which is far more than just a side project of The toten Crackhuren im Kofferraum - is the first pre-taste of a new album to come via Bakraufarfita Records. When and under which name it will drop will be revealed soon.

Das Kapitans - To the Sea (MR)
(02:52, Single, Digital, selfrelease, 01/08/2022)
After a little hiatus, Das Kapitans from English capital London are back with a new single. The song 'To the Sea' is taken from Das Kapitans' upcoming debut album which will be released on August 19, 2022.
Driven by heavy riffing and a deeply melancholic mood, Das Kapitans take us on a journey through the thick muds and intransparent mists of being an adult. Between passion and sadness, wanderlust and depression the London-based band lets heavy Garage Rock, distorted Noise and the massive gloom of Post Punk create a strong vortex of sound. Just like that, Das Kapitans tell of being dragged to something new, about wanting to reinvent oneself, about escaping the same old same-old. This is the impressive sonic tale about a nameless narrator who wants to exit the ferris wheel of growing old and instead wants to go 'To the Sea'.

CF98 - Plot Twist (MR)
(01:12, Single, Digital, SBÄM Records, 05/08/2022)
And last but not least, there is a new single by Poland's finest Skate Punk band CF98. The band from Kraków presents the ideal soundtrack to shake off all the anger that piles up during a day. This is the power-workout sound for those who have had enough of mansplaining, preaching, and monologues from self-righteous smart asses.
Thus, Karolina (vocals), Mati (guitar), Michał (bass) und Rafał (drums) take you by the hand and invite you to a 72-seconds sessions of becoming yourself again. This highspeed Skate Punk banger will be featured on CF98's upcoming album "This is fine" which will be released on September 02, 2022 via SBÄM Records.