15 new releases that are worth checking out!
15 short reviews.
If available on Spotify, one song each will also be added to the MangoRotation playlist (MR) for 14 days. 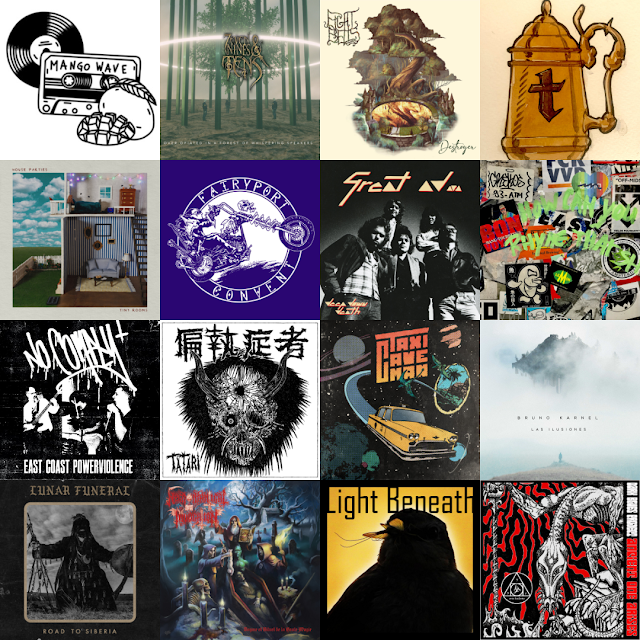 Seven Nines and Tens - Over Opiated in a Forest of Whispering Speakers (MR)
Half a decade after the release of "Set the Controls for the Heart of the Slums", Vancouver's Seven Nines and Tens are back with a new full-length release. On "Over Opiated in a Forest of Whispering Speakers", the typical Post and Prog Metal sound of the band is receives plenty of 70s Prog and Psych influence. Thus, the new album is a colourful ride through untouched spheres reaching from Shoegaze to Post Metal.
Listening recommendation: 'Popular Delusions', 'Let's enjoy the aimless Days while we can'.

Eight Bells - Destroyer (MR)
In February 2022, Eight Bells from Portland, Oregon will release their theird album "Legacy of Ruin". In the latest single 'Destroyer', the experimentalist group from the Pacific Northwest lets us see the world through the eyes of a dark and malevolent force. It is a gaze that is defined by anger and hunger, by loneliness and sadness, and by the joy of destruction. Eight Bells musick this perspective through a thrilling mix of Doom and Post Black Metal.
Listening recommendation: Embrace the cold of this hymn

Trappist - Pint of no Return
Probably many readers will feel the lyrics of this Skate Punk wrecking ball. Trappist from Los Angeles, California have recorded the song for the walk of shame; the moment when you realize that the last beer could have been too much, and thus your guts push the 'eject' button and make you barf in the alley. Since this song was originally planned to be featured on a Thrasher compilation, Trappist's Hardcore Punk has a strong Skate Punk vibe here.
Listening recommendation: Enjoy a brew or two, but beware of the 'Pint of no Return'

Fairyport Convent - Almanack
Even though the band name might not ring a bell, you might know the person behind Fairyport Convent. This one-person project was formed by multi-instrumenalist A. J. Kaufmann in 2021. New EPs by Faityport Convent have been released monthly via The Swamp since then. In this series, "Almanack" is the first release of the new year, and Kaufmann once more proves to be a master of Prog, Kraut, and Psych.
Listening recommendation: 'London Smog', 'Factor'

Great Ad... - Deep Down Death (MR)
In the 1970s, Great Ad... from Malmö, Sweden were once called Northern Europe's most violent band since their live shows apparently were savage. The album "Deep Down Death" was unreleased since recently rediscovered and now made availabe by Subliminal Sounds. The eleven-track collection "Deep Down Death" is a raw gem for fans of 1970 Hard Rock like Wishbone Ash, Heavy Psych such as Focus, and Northern European Heavy Metal à la Spidergawd.
Listening recommendation: 'She's got the Fire', 'Fast Love'

Lemon - How can you rhyme that shit? (MR)
Have you heard that the vaccination makes white men gay and barren, so that the Jewish elite can help the Lizard People import more immigrants from the Middle East. Basically, it is just a huge distraction to give them more peace when killing our babies for adenochrome. Oh, and also the elites have made up the heliocentric image to keep us from searching for the Nazi gold hidden in the (flat) Earth's core.
Sounds stupid? Well, it is.
Amsterdam's Lemon thus has a question (and a really great song) for you: 'How can you rhyme that shit?'
Listening recommendation: Turn up the volume, especially when your QAnon/antivaxxer neighbour is annoying you again.

Sweden's D-Beat monsters 偏執症者 (Paranoid) are back with a new 7''. On "Tatari", the band presents two new killing tracks. A-Side '戦禍 (Senka)' begins with a hymnic Heavy Metal intro before 偏執症者 (Paranoid) go full throttle to leave nothing behind but ashes and rubble. B-Side '砂時計 (Sunadokei)' keeps up with the pace no problem, and in total, the band shows what their strengths are: merciless riff attacks, bassladen productions, and sonic violence.
Listening recommendation: pedal to the metal, volume up

Taxi Caveman - Taxi Caveman (MR)
Vincent, Piotr, and Bartosz from Polish capital Warsaw bring us Stoner Rock from another dimension. Whether this boiling hot and brutally dynamic sound comes from space, from hell, or from a sphere unknown to humankind, one can only guess. But one thing is certain: this album is an absolute killer. The Stoner and Desert Rock genre may have become a little dusty over the past years, but Taxi Caveman are here to blow away the sand.
Listening recommendation: 'I, the Witch', 'Asteroid'

Lunar Funeral - Road to Siberia (MR)
"Road to Siberia" is the second full-length album by Lunar Funeral from Russian metropolis St. Petersburg, and you can hear from the sound that the cold of the Russian winter has left its traces in the soundscapes. Doom Metal, Garage Rock, and Psychedelic Rock made from permafrost and ice winds coins the heavy and slow songs. And yet, Lunar Fueral know how to implement colour to their songs by adding clear Post Punk-ish guitar leads and melodic, clean vocals. This is a sonic lucid dream you shuld not miss out on.
Listening recommendation: '25th hour', 'Black Bones'

Light Beneath - Sirens (MR)
With 'Sirens', Light Beneath from Tampere, Finland present the first single off their upcoming selftitled album which is about to be released on March 25, 2022 via Inverse Records. Atmospheric Post Metal and brutal Sludge come together as a stormy tide while thin air made from Shoegaze and Post Rock adds extra cold to this impressive sound. And after all, the track contains triumphant and positive subtones.
Listening recommendation: Defy the storm, embrace the cold

Dark Blues Project - Ancient One Rises (MR)
The Dark Blues Project from New South Wales, Australia will release a new LP soon. The work that will follow the EP "Darkness precedes Light" has been announced via the first single 'Ancient One Rises'. Blues Rock as dark and heavy as it can be - actually so heavy, it rather becomes Heavy Metal and Stoner Rock - tells this eschatologic scenario.
Listening recommendation: When the flames of hellfire come out of your soundspeakers, use them to light a candle