5 great new releases - 5 short reviews.
If available on Spotify, one song each will also be added to the MangoRotation playlist (MR) for 14 days. 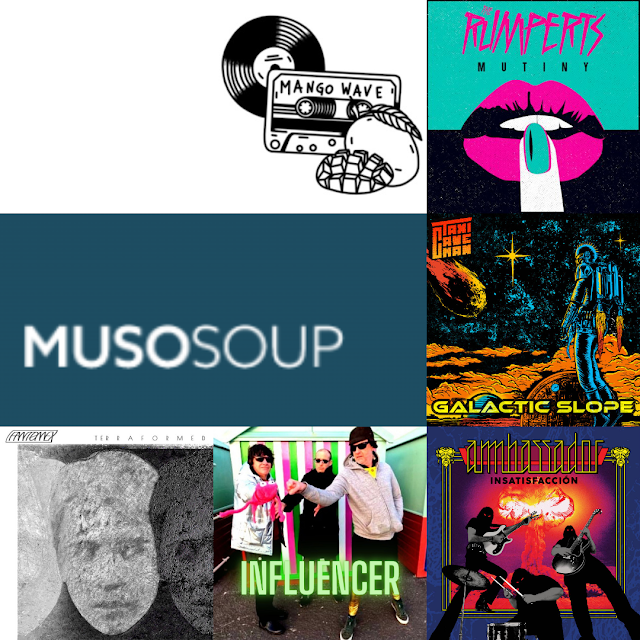 Fantømex - Terraformed (MR)
(17:19, EP, Digital, selfrelease, 03/06/2022
On their sophomore release, Fantømex from Asheville, North Carolina provide a two-fold sweeping blow. Musically, the quartet combines artistic song structures with atmospheric passages and brutal breakdowns. Whilst opening track 'Fantomcatz' is a merciless attack of Mathcore breakdowns and metre changes, the following song 'White Hole' is a much straighter Hardcore banger. In 'Gaslight', the band creates a freezing Post Hardcore and Post Metal atmosphere which is then dissolved in the rather warm but gloomy Post Punk anthem 'Machine'.
On the other dimension, Fantømex march through the past two years. Their songs concern the pandemic, isolation, the conglomerate of crises that is breaking loose upon us, and the attempt of an individual to survive in this shaken world.
In less than twenty minutes, Fantømex provide a thorough zeitgeist document. "Terraformed" is crammed with dichotomies: freezing cold and soothing warm, loneliness and solitude, love and fear.

The Qwarks - Influencer (MR)
(03:41, Single, Digital, selfrelease, 29/07/2022)
If recent releases by The Qwarks have taught us one thing, than not to jump into assumption what a song might go on like. On their latest single 'Influencer', the trio from Brighton, England once more masterfully shows off their skill in leading the audience into a musical direction until they suddenly triple-U-turn. This head-spinning move is undertaken multiple times in 'Influencer'.
The sunny psychedelic banger is opened by a hip-swinging Garage and Surf Rock theme. Somewhere from the back, a wind-lead bridge creeps in which climaxes in the anthemic Mersey Beat chorus. But then there is a second bridge: powerful rap vocals overlay a Acid Jazz theme as hot as the summer sun until this part deonstructs itself and raises like phoenix from the ashes in the form of a Prog solo.
And thus, 'Influencer' is whole night at your favourite bar compressed to 3:41 minutes, including talk, drink, mind-expanding drugs, a brawl, a fire, and everyone waving goodbye saying 'see you next weekend'.

Ambassador - Insatisfacción (MR)
(34:18, Album, Vinyl/CD/Digital, Interstellar Smoke Records, 22/07/2022)
On their third longplayer, Ambassador from Argentinan capital Buenos Aires kick off a lot of dissatisfaction, or as they say in Spanish: "Insatisfacción". On eight tracks, the band provides their audience with Blues Rock as massive, heavy and pissed off as it can be.
Ambassador are like a hurricane on their new album. With sheer force they plow through the 34 minutes of "Insatisfacción". But instead of clumsy brute they use finesse and an artistic approach to tear apart everything they are dissatisfied with. The Heavy Blues Rock on this rolling release is ideal for an intense workout session, for deliberating joyrides, or for sudatory parties where every chair and every table becomes its own little dancefloor.

Taxi Caveman - Galactic Slope (MR)
(29:38, Album, Vinyl/CD/Digital, Interstellar Smoke Records, 29/07/2022)
And right after Argentinan Ambassador, here is another hot new release by Interstellar Smoke Records. Trio Taxi Caveman from Polish capital Warsaw invites us to a fantastic journey to dimensions remote from our perception. The half-hour album "Galactic Slope" consists of only two tracks, both of them impressive, psychedelic and versatile intergalactic narratives to dive in to.
The instrumental A-Side '... and the Druids turn to Sand' is a breathtaking hovering trip over a desert planet, hostile, lifeless, and yet beautiful and fascinating. As in the later phase of the song the momentum increases, thrill and excitement raise. Is there anybody or something else on this forsaken world?
With the power of a comet's impact the B-Side 'Death Cards' brings a new mood. Doom, collapsing monoliths, and infernal flames now line the soundscape. And by that, the (sort-of) Pink Floyd-ish Psychedelic Prog journey has found its stunning end in a early-Sabbath-like eschatologic scenario (in space).

The Rumperts - Mutiny (MR)
(03:07, Single, Digital, SBÄM Records, 28/07/2022)
The Rumperts from Vienna have officialy intiated the promotion phase of their upcoming album "New Age Jesus" which will be released via SBÄM Records. The Austrian Punk Rock band has therefore presented the first ex ante single 'Mutiny' which deals with the topic of toxic relationships. From the perspective of the person who suffers under this situation, The Rumperts tell about never being good enough, always trying to please the partner, and thereby cheating on oneself.
With high energy, dynamic speed, sufficient melodic impact, and an athemic chorus, The Rumperts hereby present a banging Skate and Hardcore Punk hymn that raises the anticipation for the new album.