- February 04, 2020
There are several bands that go by the name Hellion. Here we are talking about Hellion from Medellín, Colombia. The thrashing Black Metallers, the pitch-black Thrash Metallers, the Satanic Warriors from the former capital of cocaine trade.
Since 2014, Santiago, Milo and Pablo dedicate themselves to full-speed and gloomy Metal. Recently their first two albums "The Rising of the Wizards" and "Hordes of Witchery" were re-released together with their new album "Rebel's Curse" via Awakening Records. 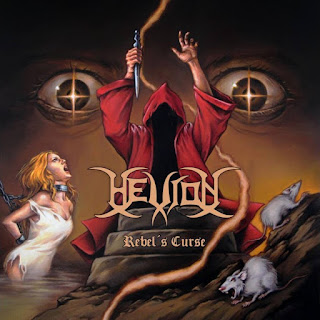 Compared to the recent albums the impact of Thrash Metal has gotten more intense. High-speed staccati rather vanished and instead, galopping chaotic and punkish rhythms are more dominant on "Rebel's Curse". The Black Metal influence is still present but is not as central as it was on "Hordes of Witchery". In general, the album is coined by raw assaults and high-speed riffing. The drums shoot like a gatling gun and the vocals spit pure poison. Here and there, high-pitched guitar licks or soli dance across this beautiful creation of savagery.
Hellion's "Rebel's Curse" is insanely intense and a brachial attack to all headbangers' neckbones. Fans of 80s Thrash Metal will have a lot of fun with this album and its predecessors. This is savagely gorgeous violent music. For a bit more than half an hour "Rebel's Curse" destroys everything. If your speakers haven't burnt down yet, feel free to press 'repeat'.
Hellion Online:
Facebook
YouTube
Spotify
2019 Awakening Records Black Metal Colombia Hellion Medellín Milo Ramirez Pablo Gómez Review Santiage Perez Thrash Metal