- February 12, 2020
Two years afters their first release "In Darkness Act I" Thrash Metal quartet Warrior Within strike back with their second EP "In Light Act II". Founded in the early 90s the band from Sunshine Coast, Queensland went through some changes in their line-up until now being thrashing, hammering and stomping like crazy. 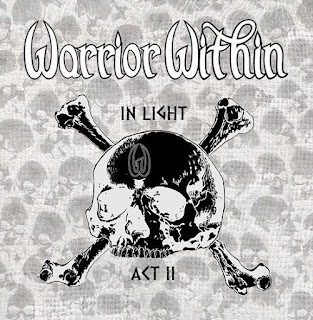 The new selfreleased EP is available since 08 February 2020 and comes with four tracks lasting 20:36 minutes. On those tracks the band plays rough and Thrash Metal with rattling sounds, speedy riffing and a roughneck Hardcore attitude. The massive rhythms grind straight forward in an unpolished manner while distorted bass and guitar coarsely push forward and singer shouts and barks with a powerful voice.

The Thrash Metal theme is the omnipresent force on this EP. On the track 'Ratrace' Hardcore influence is shining through by the backing vocals and the most melodic song 'The Felling of the Oak' presents the strongest impact by Speed Metal on "In Light Act II". Due to it containing the highest amount of variety on this EP, the track 'The Felling of the Oak'  definetely is the climax of Warrior Within's second EP which then beautifully fades into the melodic intro of the last song 'Awakening' - the fastest track on the release.

After two acts being played, I still hope Warrior Within can work on their individual style. Hardcore influenced raw Speed and Thrash Metal is definitely a beautiful thing, but I am still missing memorability a bit.
Still, a great and loud EP! And I can imagine they wreck house when playing live.
And therefore, for my Australian readers, check the tour dates:
29/02/20 Hamilton Station Hotel, Newcastle
20/03/20 The Back Room, Brisbane
04/04/20 Stay Gold, Melbourne
09/05/20 The Back Room, Brisbane
16/05/20 The Townie, Sydney
20/06/20 The Chippo Hotel, Sydney