- February 22, 2020
For those of you complaining contemporary Thrash Metal is lacking force and brute, I've got something for you! Let me introduce you to Lima-based five-piece destruction crew Hellthrasher. The band has recently released their nine-track EP "En Tinieblas" (Spanish for "In Darkness"). 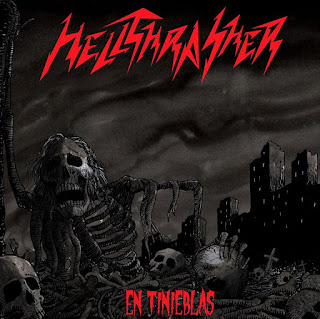 The EP contains about half an hour of pure, heavy, raw and deeply Blackened Thrash Metal. I recommend you to fasten your seatbelts and make sure you have enough space to bang your head like crazy since the five musicians provide you with the roughest full-throttle Thrash Metal.

From the darkest depths of the abyss Hellthrasher arise and clench their fists of metal ('puños de metal') to leave nothing but burning rubble and sheer destruction. With an unleashed and brachial intensity full-speed Heavy Thrash Metal riffing blows out of the peakers, accompanied by a machine gun-like battery. On top of that beautiful noise Cris' vocals yell, scream and shout eveything down that hasn't been obliterated by now.


As the band is pretty hard to search for online and their presence on the internet is rather rare, you might ask who the quintet from Lima is playing for? Well, definitely not for this RocknRoll ('no para este RocknRoll'). Hellthrasher play music for the revolting, for the fans of ultra heavy and rough music. Hellthrasher might be one of the truest band I have encountered in my research on Thrash Metal. And the best thing is that there is no fake posing, no pathetic insincerity. No. This is the real shit! 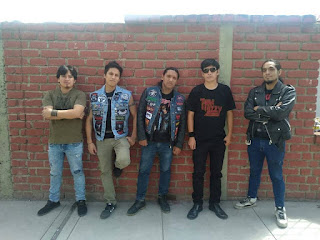 From the post-apocalyptic acoustic intro over to the instrumental 'Himno Sepulcral' ("tomb hymn") until the last chords of 'Excusa para morir' ("Excuse to die"), the whole EP is a thrilling powerload of speed, brute force and headbanging fun. I absolutely recommend putting on "En Tinibeblas" on your next Thrash Metal party. The people will go wild!
The EP is being distributed via Gate of Horror Productions.