- May 02, 2020
Antillectual's newest release is a 7'' Vinyl containing four cover versions. The idea the Dutch band had was to cover four songs that had a strong impact on early day Punk Rock. Instead of paying hommage to the bands that influenced the Nijmegen-based trio themselves, they preferred going back to the beginnings of Punk Rock Culture. The outcome are four classics reinterpreted in the melodic and somewhat Mod-influenced style of Antillectual.

The cover arwork by Andy Dahlström shows four pictures of Antillectual which are based on the four originals. The beautiful thing about this cover is that you can wrap it around the vinyl record whatever way you want. It will always show two of the artworks.
Release date of the EP is May 12, 2020.
First song is 'Truth hits everybody' by The Police. The song released in 1978 by Sting, Andy Summers and Stewart Copeland comes in a dynamic new version that does not deny its original melodic sound. Antillectual perfectly hit the interface between Mod, Pop and Punk Rock. 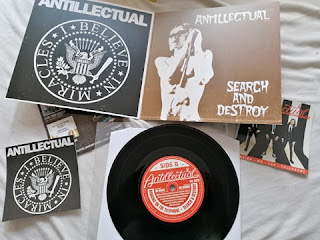 Next up 'I believe in Miracles' from the Ramones' eleventh studio album "Brain Drain" (1989). Ramones fans might know that this is not the first time the song was covered. Andy Vedder, Zeke and Pearl Jam love to play that one, too. Tempo and intensity of Antillectual's version are pretty close to the original, but the Dutch trio rewrote the song more melodic and the chorus is way more harmonic. 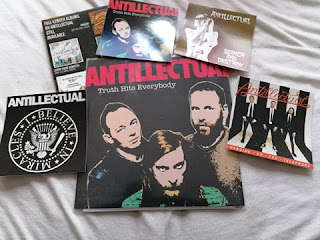 The B-Side begins with 'Hanging on the Telephone', written by Jack Lee and performed by The Nerves on their self-titled EP in 1976 and later covered by Blondie in 1978. The version by Antillectual is beautifully dynamic Mod Punk. Music for missed calls and canned beers. The Surf Rock impact from The Nerves' version was almost completely abandoned. Instead, Antillectual's 'Hanging on the Telephone' is closer to Blondie's version - even the ringing of the phone was implemented in form of a vibration alarm. But still, Antillectual's version is way more Punk Rock. 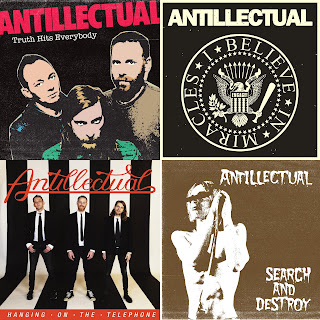 Last but not least, one of the biggest classics for early-day or Proto-Punk. 'Search and Destroy' by The Stooges from their third album "Raw Power" (1973). Not as fuzzy, not as rusty as the original the Dutch trio reinterpretes the Anti-War song. If The Stooges were Mods and they would record the track in contemporary days this might be what it could sound like.

Planning a Punk Rock Party soon? The "Covers EP" should be part of it.

Fresh Mango 15 new releases that are worth checking out! 15 short reviews.  If available on Spotify, one song each will also be added to the  MangoRotation playlist  (MR) for 14 days. Low Treble - Two-Bullet Johnny  ( MR ) Two-Bullet Johnny is back in town! Low Treble from Thessaloniki, Greece present the second single of their double EP project. This is some heavy and dynamic Rock music with an honest and funky twist. Turn up the volume and put that pedal to the metal! The treble may be low, but the acceleration is serious here. Betty Benedeadly - Coyote's Fever Dream   ( MR )   Close your eyes and feel how Betty Benedeadly's soundscapes make you discover an environment hostile to life. The term Desert Rock cannot be described better than by this song. If you love the sounds of  Enrico Morricone  or Crazy Arm's second but last album "The Southern Wild" , this instrumental will blow you away. The Dead Krazukies - Go Away   ( MR ) This amazing Punk, Hardcore,
Read more