How to help the people in Ukraine 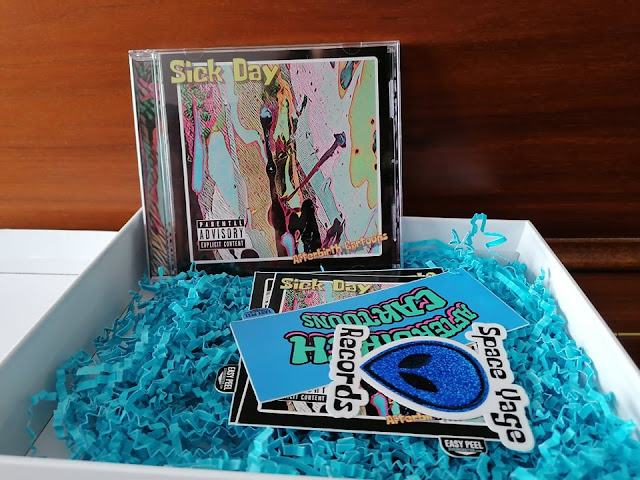 Quite some time has passed since Galatea (bass and vocals) of Afterbirth Cartoons has first contacted to request a review of the band's latest album. Sorry for taking so long, Galatea, Jacob (drums), and Alvah (vocals, guitar, harmonica, vibroslap).

The review will commence after the first music video. Feel free to skip my rambling if you like.

The CD should have arrived at the MangoWave HQ around mid-March 2022. Neverthless, the German customs office wanted to be sure I am not receiving illegal substances or weapons etc sent from the USA. Thus, I had to go to a neighbouring town to pick up the parcel. This has happened before when I had Totally Unicorn's record "Sorry" shipped back 2019. Thus, back from my holiday in Slovenia I went and grabbed the parcel in Dettelbach and three days later I got tested positive for covid. Hooray. And somehow after being recovered and trying to fight against the workload that has piled up, "Sick Day" got forgotten. But now, here it is: the review about a concept album that deals with hating your job.

The theme of Afterbirth Cartooons' "Sick Day" deals with some of the many reasons why our late capitalist society sucks. The protagonist finds themselves in a situation many people in the so-called first world can relate with: they have to go to work but they just cannot find any motivation to do so. Hoping to find some rest for body and soul, they call in sick.

Once one has called in sick, several questions may pop up. Some of them are rather philosophical as in whether one is really sick, and if maybe it is work that is the sickness, or if Adorno was right after all. A simpler question might be what to do with the free day, and whether one has the capacities to do something productive, or if one prefers to relax and enjoy doing nothing. The protagonist in "Sick Day" decides on spending this day off watching television. 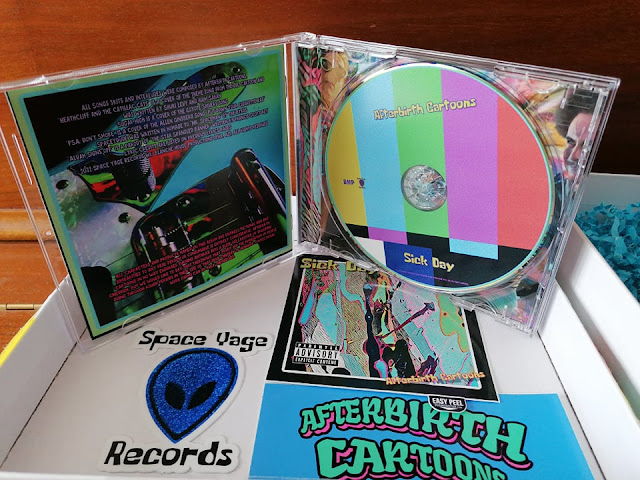 It is thus the story of a person who decides not to be a wheel in the capitalist machinery for at least one day. Therefore, the content is full of US American TV programs such as Heathcliff, commercials, news broadcasts, and more.
A uniquely outstanding is the infomercial telling about the dangers of smoking which is then followed by a commercial for sugary and addictive cereals. The song 'Sugar High' was originally written by Coyote Shivers.
Over the course of the nineteen tracks on "Sick Day", Aferbirth Cartoons confront their audience with the vast insanity and mass of contemporary media. It is as The Kinks sang back in 1989: "Sex, violence, murder, and rape - entertainment, entertainment". Or in Afterbirth Cartoons' words: "Be scared and buy stuff!".

The medium that Phoenix-based trio Afterbirth Cartoons use to tell their tale is called Sardonic Beat Punk. Since not everyone might be acquainted with the name of this genre, it can be understood as an idiosyncratic and avantgardist mix of Punk Rock, Garage Rock, Psychedelic Rock, and late-90s Alternative Rock. Further ingredients to the recipe that make Sardonic Beat Punk are anger about the status quo in our society, the need for more truth and less violence, and the beautiful feeling of being able to express oneself. 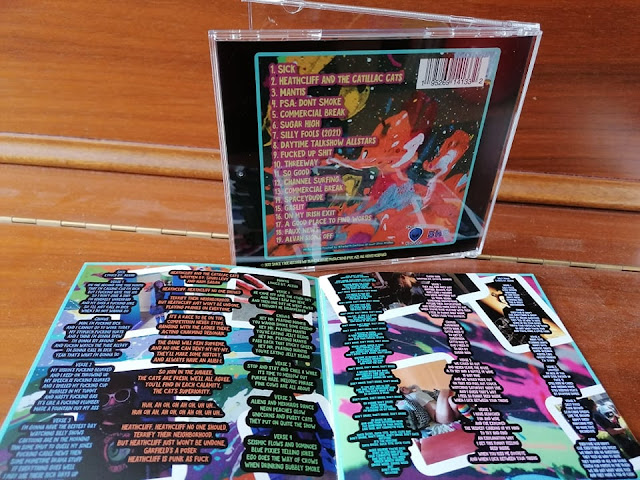 The powerful and also empowering sound gives the narrative of the album a whole new perspective. Thus, "Sick Day" is not just the story of someone who does not like their job. It is furthermore the soundtrack for the giant moshpit that shall make the castles and forts of the patriarchs and capitalists pulverize.